Looking back from the perspective of (advanced) middle age, youth seems like a time of fun, great promise and opportunities, strong feelings and enthusiasms, and physical power, if not outright fearlessness.   That view however is the result of the removed vantage point, like a rainbow: beautiful from a distance, but for those standing in it, mostly clouds. I can remember that youth was full of anguish, anxiety, and frustration — and mine was happy!    Youth knows the huge hassle of everybody always telling you what to do, soon followed by the huge burden of having to make decisions without those good people telling you what to do.

What’s this got to do with the New Hampshire primaries?  The rest of the day Saturday, after Carly Fiorina’s event, gave the stage to youth in various settings.

In the afternoon I make email contact with Evan Madin and Joe Liberti, teachers at Mamaroneck High School.  I was in touch with them prior to my trip; they were taking a large group of MHS students, from their Government & Politics and Journalism classes, up to New Hampshire to see the primaries up close.  Mr. Liberti has done this a couple of times before, and it’s a unique opportunity; MHS is the only high school to do it.  I’d seen their interview on local tv via YouTube and read a couple of the news stories.  This time joined by Mr. Madin’s journalism students, the group was about 100 kids.  I had told them of my trip and blog, and offered my availability; Mr. Madin had said some students might be interested in talking to me about my political tourism.

As I am here from Tuesday to Sunday, but the students only from this afternoon, Saturday, til primary day Tuesday, our overlap is short.  They are staying in Concord at the Holiday Inn.  I contact them and am told I can visit around 5 p.m., so I drive up.  Concord is half an hour north of Manchester.

I find them in a room off the main entry of the motel, about 20 students sitting around a large table, each in front of a laptop.  I’ve brought the laptop in case they want to see photos or blog entries, and take assorted stuff I’ve picked up: flyers, stickers, the program from the Democratic gala, even my Bernie hat.  Mr. Madin tells me they are working on writing stories, on a deadline.  They’ve been able to meet with some NY Times people earlier.  I say I hope they will be able to see the candidates, or some of them, and he assures me they will.

I get the feeling he is being polite to me as a constituent.   (They know I’m a parent in the school district, and my daughter was in one of Mr. Liberti’s classes a few years ago.)  But he is clearly preoccupied with the pressure of overseeing the large group, and apparently does not see me as being of any use to his students.  (Probably right.)  So after a glance around the room – a couple of students give me a curious look back – I thank him and take off.  I meet Mr. Liberti in the foyer; he is busy too but more cheerful, and I pass along to him the details of the fabulous Mr. Ovide Lamontagne in case he wants to try reaching him.  And that is it.

The students’ work is available through medium.com with the tag new-hamp-2016.  They appear to be straight news stories.  (You may have noticed my own style is more eccentric.  They don’t teach eccentric in high school, except in England.)

Now driving back from Concord a little after 5 o’clock, it occurs to me I can go over to the Republican debate, at St. Anselm’s College, which is in Manchester but on the west side of the river.  I have no illusions about actually attending the debate – I think the audience is by invitation from the party – but it will be neat to see the scene.  And journalistic responsibility calls.

St. Anselm’s – it’s Benedictine – is on a hill, and as I slow to a crawl on the street leading into campus, now one of a long parade of cars headed there, I realize this must be the ‘shining city on a hill’ I heard so much about during the Reagan years.  For indeed, it is shining very brightly ahead.  The sky and ground at the top of the hill are dazzling.  Arrays of klieglights blaze, and at the turnoff toward the debate hall, police are checking papers and waving in the happy few, and directing the rest of us to keep on straight down the road.  As I inch past the turnoff, I see there’s a large field, brilliantly lit, full of (mostly) young people with signs and banners for their respective favorites, Trumps and Cruzes and Kasichs and the rest.

After a while I turn off this packed road, drive on a more empty one, turn again right, and then again, now on a dark, completely empty street of scattered houses.  Maybe faculty live here, or just people who live next door to the campus.  I pull up in front of one near the end of the street, and park.  Why not?  No anti-parking traffic cones here.  A little walking and I’m back on the crowded entry road, with the bright lights ahead.  In the land of the traffic jam, the pedestrian is king.

I get to the field and mingle with the kids carrying signs.  Under the tv lights the scene is doubly brilliant as snow covers the ground, reflecting up.  Plenty of good-natured jostling, and groups yell and wave signs whenever something happens – a bus or fancy car pulling in, a shift in the lights, the presence of a reporter.  Any camera of course draws a crowd; so do friends’ arrivals with boxes of donuts.

So as not to be mistaken for a stalker, I follow the example of the few real reporters there and ask a couple of kids some questions.  Are they students here?  No; they’re from Connecticut, and came up for the day, to do this.  They’ve been here a few hours.  They’re cold but they’re having fun.  (They must have too much time on their hands, just like me.)

After a little while of this I decide I’ve seen what there is to see, and I’m getting cold too.  But then an actual newsworthy Event happens and I’m there to witness it.  A stream of marchers comes from the street, apparently discharged by buses, and heads through the gate into the field.  They’re loud, and holding signs all on the theme of a $15 an hour minimum wage.  They are mostly young, and some probably are students themselves, but they tend not to be dressed as well as the candidate-supporters, and they include more people of color.  They are chanting “What do we want?  Fifteen dollars!  When do we want it? Now!” and “Hey hey – a living wage!” or variations on that.  The signs, professionally made, mostly just say “$15” but there are some labor union signs as well.  They march through the midst of the candidates’ supporters and drown them out.  There are more and more of them; somewhere many buses are unloading, and they just keep coming.  It’s very noisy and crowded, but peaceful.

And then, after a few minutes, I see a handful of Cruz supporters not twenty feet from me, still carrying their signs, walk over to a few Rubio supporters.  They huddle for a while – then fan out and talk to their friends.  And a large bunch of Cruz and Rubio supporters, mixed together, starts a counter-chant: “Free market!  Free market!”  and they go on to other counter-chants, although with a minute or two between each, as each time they have to come up with words they can agree on.  I clicked a photo but it doesn’t do the scene much justice — minimum wage protesters on the left, candidates’ supporters on the right: 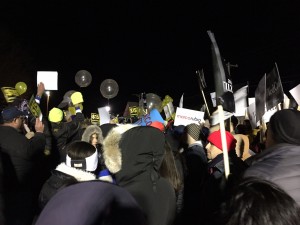 I am smiling.  Somewhere, Milton Friedman is smiling.  I don’t know which pleases me more, the kids’ economic beliefs or the cooperation between rivals.  But I feel warmer, and younger, as I walk back to the car.