The day after the snow, the sun is out, and the car has only a thin veneer of frost; I start to scrape the windshield, but a few minutes with the motor running and all is clear; don’t even have to scrape the back window.

Today’s first event, for me, is a 10 o’clock town hall with Carly Fiorina in Goffstown, about 25 minutes west of here, at the Maple Avenue Elementary School.   The incisive reporter, ever alert to clues, knows that tonight’s Republican debate is at St. Anselm’s College; Christie’s town hall back on Tuesday was at Londonderry High School; and tomorrow, Rubio is at the same Londonderry High School: is there a pecking order here?  Does an event at an elementary school connote junior status?  Will we have to sit on those tiny chairs like at parents’ back-to-school night in second grade?

The room is large – it’s the school gym – but when I walk in at 9:15 there are just a few rows of chairs, set up on three sides of the speaking area, which is backed by a wall of curtains and a big Fiorina sign.  No platform.  And a first: the stool/mike/water setup is absent.  She must be some kind of radical.

I take a seat in the center, second row, and after a while start chatting with the couple behind me.  They’re in their 50s I’d say, and turn out to be friends rather than wife and husband.  He’s a Democrat from Massachusetts; she’s a Republican from Nashua.  They are checking her phone for an AARP site that, they tell me, compares candidates’ positions by issue, and they have been looking at social security as they can’t find Carly’s position.  The woman is undecided among candidates but this is her first in-person visit with one; she’s been working.  (Ah yes, some people actually have jobs; I’d forgotten today is Saturday.)  She says she works “in defense” and tells me that if she’d done what Hillary has done she’d have been fired and prosecuted.

The first introducer (not an actual job title) is a former New Hampshire state representative who served 8 years in that position.  She looks about 22 to me.  She asks us all to take a smartphone photo of the ‘letCarlydebate’ sign and send it out – “make it manifest.”  Twitter, hashtags.  I decline as it would impair my strict journalistic scruples.  Besides, I don’t know how.

The second introducer is a handsome large-chested middle-aged guy (I decided I should be equal-opportunity here and not just describe women) with the wonderful name of Ovide Lamontagne.  He’s Carly’s state campaign director and a partner with a northern New England law firm.  He says we need to picture Carly “as POTUS” and that she will make a great commander in chief.

All this time the staff has been bringing in more chairs, and they are all filled.  People are standing too, around the walls of the gym.  Ovide asks us a favor – he’s a friendly guy – that when Carly comes in, could we hold up those signs that were on the chairs, and wave them?  The press are here of course (besides me) and so are campaign videographers.

She enters and we all wave our signs and yell.  Me too; this is fun.  Carly (she’s very much a first-name candidate) looks smart in a grey and blue pants and vest outfit.  She says she started out as number 17 out of 16 candidates.  We’re now down to 8, but the game is rigged: since when do polls count more than votes?  She makes a strong pitch for being included in tonight’s debate.  I know ABC tv excluded her on some rational if slightly complicated criteria (poll standings and Iowa finish) but it does seem silly to have seven on stage when there are now just eight major candidates.

She tells how she started out as secretary-receptionist in a 9-person real estate office: It’s only in this country where I could become CEO of what we made the largest tech company in the world, and run for the presidency.  (She doesn’t say ‘run for president’ but ‘for the presidency,’ which appeals to my grammatical vanity, even though I believe both uses are correct.)  “All my life I’ve been told to sit down and be quiet.  I have always ignored that.”  Our government has become a giant corrupt bureaucracy that doesn’t work for the people.  We’ve been hearing the same promises for 30 years.  But we have to remember who we are as a country – it was never intended that we have a professional political class; this was intended to be a citizen government.

She’s big on zero-based budgeting.  Bills have been pending in the House a couple years now for this, but they don’t want to vote on it.  We need people and pressure.  From the White House, I’ll ask citizens to take out their smartphones and text 1 for Yes, 2 for No, on that proposal, put public pressure on Congress.  (She jokes how New Hampshirites seem attached to their flip-phones: “You may need to consider an upgrade.”)

After her brief but strong speech come the questions.  The first is from an atheist who says Ted Cruz said yesterday that atheists should not be qualified to be president.  Do you agree?   Fiorina starts out by saying her faith is very important to her; it’s the foundation of her empathy, humility, and optimism.  But she respects the questioner’s choice; “this country was built on religious liberty,” and that includes his non-faith.

Question on women being subject to selective service i.e. the draft (if we were to have one again).  Yes, but don’t lower the standards.  A question on how to help small business.  We need to radically simplify the tax code; at HP we could afford a whole bunch of accountants and lawyers to do the taxes, but a small business can’t, it gets crushed.  We need a three-page tax code.  “There’s a 20-year old plan in Congress for that, that nobody talks about or votes on: go to the smartphones!”  (To the barricades!: press 1 for Yes, 2 for No.)

Other questions follow, but two among the last questions stand out to me.  One is about increasing our military activity with our NATO allies.  Starting there, Carly states the case for American world leadership and what happens when it is absent, and moves to the lack of support for the embassy at Benghazi, and Secretary Clinton’s later response to Congress, “at this point, what difference does it make?”  In Fiorina’s view the policies and public attitude of the Administration told our enemies that it’s “open season on Americans.”

The other is a question on the ‘war on poverty’ which the questioner observes we ‘don’t seem to be winning.’  Carly talks about her role leading the world’s largest micro-finance organization: “we lent $8 billion out, $100 at a time.”  Her visit to the slums of New Delhi — we have poverty here but nothing on that scale or that depth — where she held a meeting, sitting on a rooftop, with ten women with no formal education, to whom her outfit had lent money.   Seeing focus and determination and hope in their eyes; talking business with them.  We have to stop incentivizing people to not work: a single mother here gets government support that she’ll lose if she takes a job, the risk is not worth it for her.  “This is the difference between conservatives and progressives: conservatives believe all people can do it, everyone is gifted by God so that with the right help up, they can make it.  Progressives believe some people are smarter than others, and we smart ones need to ‘take care’ of them.”  Her statement seems to me not only correct but fair to both sides.

Here she is speaking, and here am I giving sage campaign advice to my new pal: 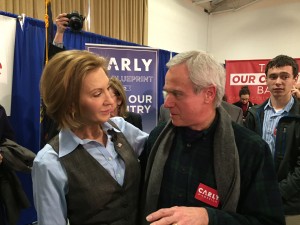 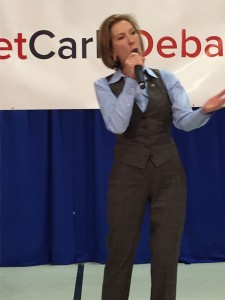 I came today to see her just because I wanted to see as many candidates as I could.  But she’s given me more than I expected.  When I go up to her afterwards I tell her, and mean it, that those were the two best answers I’ve heard from any of them.

I don’t get to vote this Tuesday.  Or at all: as a Democrat, I’m not eligible to vote in the Republican primary in New York, and despite Bernie Sanders’s popularity in New Hampshire, I expect he’ll be roadkill under the Hillary bus by the time it’s New York’s turn in April.  Carly might be gone by then too, and that would be a shame.