Today is Sunday and my last day here.  I’m up early to pack – which takes five minutes as I didn’t bring much – and write a note to my host Jason, thanking him for the luxurious lodgings.

Then I hit the road for a last event:  I’d rsvp’d to a Marco Rubio pancake breakfast at Londonderry High School.   Marco took a shot to the chin last night in the debate, clocked by Chris Christie for using memorized 25-second soundbites, and the senator didn’t have a snappy comeback.  The crowd at the Radisson bar, where I watched, felt Christie had landed one, and so did the press the next day.  So having chosen today’s event was fortuitous as I’ll get to see how Rubio looks the morning after.

I got two emails from his campaign later last night, after the debate was over, and they seemed a bit at cross purposes.  The first regretted that they’d be serving just coffee and muffins instead of pancakes, due to larger than expected numbers who said they were coming.  The second said that following the debate where his rivals had ganged up on Marco, it was important to have a good crowd the next morning so please make sure to come.   I expect the first was from a logistics person, and the second from a politics person.

The cafeteria at the high school is large but when I arrive at 8:30, an hour before the event is to start, it’s already standing room only.  Lots of press here too.  A couple standing next to me are talking with friends, and I keep writing notes on my pad; after they notice me I feel compelled to assure them that I’m not taking down what they’re saying.  (Actually I am filling in points from the previous day, and translating my quick scrawls into English while I can still remember what they mean.)  But this leads to our chatting.  Jim and Johanna are both Tufts alumni and both in the public health industry; Johanna added a master’s from Harvard (showoff).  They’re nice people, and clearly have been paying attention to the campaigns.  It surprises all of us when we realize today is Super Bowl Sunday; I have not thought about the Super Bowl all week.  After a while a press lady walks over and interviews Jim, first, and then Johanna.  She turns out to be from Il Messagero, in Rome, and once Jim tells her that Johanna lived in Italy for four months, they’re into an animated conversation.

Marco is maybe a half hour late.  He gets a big hand and launches right into his speech. Here is a view of some of the crowd: 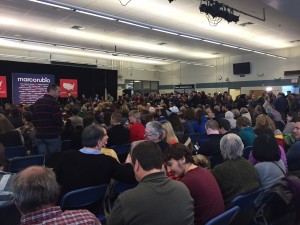 I am glad to find his talk is not a copy of the one I heard from him four days ago.  He speaks of American exceptionalism.  When was the last time you saw a boatload of refugees from America wash up in some other country?  He talks about his competition; not his Republican rivals, but Hillary and Bernie.  Bernie Sanders is clear about it – he’s a socialist  – but if you want to live in a socialist country, move to Scandinavia.  Hillary is “not qualified” (that’s the phrase he consistently uses) to be president, for her handling of Benghazi and for lying to the families of the Americans killed there.   But a big part of his appeal is on electability:  I can unite the conservative movement and the Republican party, I can win independents, and the people living paycheck to paycheck.  And he notes an accomplishment – which he should have done last night – in leading the effort to get rid of the insurance company bailout provision of Obamacare.

And he again says the things that reach me: that the national debt is a bipartisan debt; that he’s not being anti-immigrant to want to secure the border; and the obligation each generation owes to its predecessors, and that it is his generation’s turn now.  When he turns to questions, his answers seem personal and thoughtful, and not canned.  Nobody asks him about last night’s debate.  He emphasizes the need for state and local control over education: if you have a complaint or a proposal, good luck going to the Department of Education in Washington to see somebody with it, but you can have influence on your own local school board.  Somebody does ask him to differentiate himself from Ted Cruz, and he points to their respective tax plans.  Cruz favors a form of value added tax, but Rubio opposes that; a VAT is too hidden, consumers won’t see it and it’s too easy for Congress to raise it; Rubio advocates simplifying and reducing the income tax we have.

After questions, there is the usual scrum around the candidate for individual talk, photos, handshakes, but as today’s event is about three times as large as those I’ve been at, the mass looks never-ending.  Still, he gradually works through it, one person or family at a time.  I have a moment with him.  OK, so it’s not my best picture… 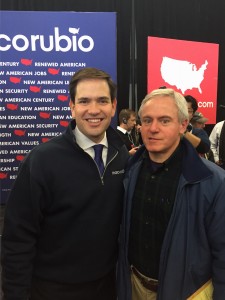 Our whole conversation is as follows:  “You need to adjust for the next debate.”  Rubio: “We’ll be fine.”  Me: “I’m rooting for you.”  If he recovers from his stumble of last night, something he’s surely aware of despite his confidence, I will take full credit.  I am available as campaign strategist, for a reasonable fee.

Each candidate probably sees the current election in terms of some particular past election.  On the drive home it seems to me that Hillary wants to take us back to 2008 and recapture that coalition; I have no idea where Trump wants to take us; Cruz wants his to be the Reagan candidacy of 1980; but Rubio reminds me of a certain candidate from 1960.  Which would slot Hillary into the Nixon role, which I somehow feel she’d object to.

This year New Hampshire may not fulfill its self-proclaimed role of “choosing the president.” But it’s still the best place to take the measure of those who want the job.  I’m glad I made the trip.