Friday’s concluding event is a big Democratic fundraiser, officially the McIntyre-Shaheen 100 Club Celebration.  It’s the New Hampshire Democrats’ largest annual gala, and this year celebrates 100 years of the New Hampshire presidential primary.   The namesakes are two families at the top of the state Democratic food chain, represented most prominently by former Senator Tom McIntyre and current Senator, and former Governor, Jeanne Shaheen.  And the featured speakers are of course Bernie Sanders and Hillary Clinton.  Luminaries – perhaps too strong a word – in attendance include Sens. Al Franken, Cory Booker, Amy Klobuchar and Debbie Stabenow.

The gala is being held in the Verizon Arena, Manchester’s largest venue, where the hockey Monarchs, a minor league team, play.  I arrive about 5 p.m., on time and on foot, having walked from my grand abode; about 25 minutes’ walk.  Today’s snow has stopped and it’s a lovely evening, not too cold.  Dozens of supporters from both camps, and other causes, are outside the arena waving signs and being loud.

Inside, after the metal detectors, I make my way up to the main grandstand level.  Seats at tables for a buffet dinner on the main floor – tables set up where the hockey ice would be – cost $250 a person.  Above in the grandstand, tickets were $50 or $25.  I had chosen the latter, but it appears almost no one is sitting in the top deck; all of us peons have been filling the main stands; I hope the $50 ticket buyers are not upset.

The seating is a long horseshoe, with the large stage bedecked with flags at the open end.  I’m at about the 40-yard line, with the stage to my left.  As the stands fill, and the tables below remain fashionably empty, I form the impression that more than three-quarters of the crowd are Hillary supporters (I deduce this from their t-shirts, banners, hats, signs and even fleece jackets, all emblazoned with her name or the arrow-H logo).   As time passes I realize that the stands opposite me, the other side of the horseshoe, seem just as heavily Bernie as my side is Hillary.  I wonder if this was planned (and no one bothered to ask me or direct me) or is the result of impromptu tribal bonding.

One interesting effect of this is that during an introductory video, shots of Sen. Sanders alternate, more or less, with shots of Secy. Clinton, producing competing outbursts of cheering from alternating sides of the arena.  Hard to tell who’s winning but it’s very loud.

I do the math on the rows and columns of tables (and allowing for six short rows to leave room for the buffet stations) and get 85 tables.  Each holds ten people.  By 7 o’clock they are starting to fill up and the food smells good.  I again have not yet eaten today, except for that cup of soup in Exeter, so I head out to the concession stands and return with a couple of hot dogs and a Coke.  The New Hampshire Gay Men’s Chorus is singing.  I eat the hot dogs hoping a hockey game will break out.

The program begins – the Chorus belts out the national anthem, and then God Bless America.  We all remain standing to say the pledge of allegiance.  And I thought only the Republicans had stooped to that to begin all their events.  This is followed by state party functionaries, numerous and enthusiastic, each with his or her little piece to say.  The state party chair, fellow named Ray Buckley, proclaims there are 6,000 people here.  I’d say half that would be more like it but it’s hard to tell.  Hockey capacity is about 9,800 and all of the top deck, and half the main stands, are empty; still, it’s big and bright and noisy and he’s feeling expansive.

We’ve all been given a program, so I can follow our progress down the agenda.  It’s slow.  Then comes Debbie Wasserman Schultz, the DNC chair.  She says the Republicans want to drag us backwards, back to the days when healthcare was not a right.  Two more short speeches, and an award, and then it’s time for Bernie.

Pandemonium, especially from the opposite stands, as he enters – preceded by video accompanied by Simon & Garfunkel’s “America.”  (He also uses “Disco Inferno” at events.  If we go by music, he wins the election hands down.)  His speech does not disappoint – he is passionate, strong, righteous:  End this corrupt campaign finance system.  No nominee of mine to the Supreme Court will get that position unless he or she is very clear they will vote to overturn Citizens United.  We will create an economy that works for working families not just the people on top.  Raise the minimum wage to a living wage of $15 an hour.  Reform our disastrous trade system.  And public colleges and universities should be tuition-free.  Republicans want to cut Social Security — we will expand Social Security.  To corporations who shield money in the Cayman Islands and Bermuda: you are going to start paying your fair share of taxes.  Big banks, the pharmaceutical industry, people living in the shadows, criminal justice reform.  And we are tired of seeing unarmed people shot down by the police.   Finally, health care is a right of all people, not a privilege. 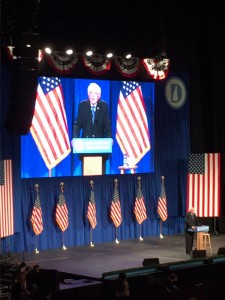 He never mentions Hillary but takes a couple of shots at her: he opposed it (she didn’t) back in the 90s when Republicans “and many Democrats” said it was a great idea to deregulate financial institutions.  And of course: in 2002 – in the most important vote in the Senate’s recent history – GWB, Cheney and Rumsfeld (boos, hisses) said we should invade Iraq.  “I not only didn’t believe them, I voted against that war and helped lead the opposition to it.”  Leadership is about standing up and being counted when times are rough and you may be in the minority.  Here is a shot of the scene, in part: 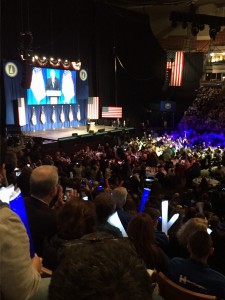 It’s an old fashioned stemwinder and he gets a huge ovation when he’s done.  But only about one quarter of the table guests are standing and applauding, compared to half those in the grandstands.

Between acts, as it were, the stage goes to Maggie Hassan, current governor who is running for senate, looking to unseat the much despised (in this room) Kelly Ayotte.  Both Gov. Hassan and senior Senator Shaheen endorse Clinton: “she will build on the progress  of the Obama administration.”

Hillary is the last speaker.  Similar ovation, now from my side of the arena.  And she delivers a barn-burner too; no sense holding back among friends.  But to my ears she is not as fluid as Bernie; it’s second nature to him, but she has to work at it and sometimes it clunks a bit.

The best part, for my taste, is her opening quote from Daniel Webster: “New Hampshire is a small state, but there are those who love it.”  She is one of those, ever since “we” came here in 1992.  Bernie Sanders has a big lead in the polls “but New Hampshire has never quit on me and I am not going to quit on you.”

“Both Bernie Sanders and I want to stop bad things from happening in America.  But I want to start good things happening!”   We need to break down barriers of racism and sexism; remove the obstacles to people achieving their best.  She picks up what husband Bill said in the intro video we saw: “those of us who have more yesterdays than tomorrows still, believe it or not, spend most of our time thinking about the future.  I know I do.”

Her peroration asks us to ‘imagine a tomorrow’  — where the minimum wage is not a poverty wage; a tomorrow without Citizens United; without gun violence.

She recalls she first came to New Hampshire in 1968 to campaign for Gene McCarthy.  (I wonder how many of the screaming young women around me in the grandstand know who Eugene McCarthy was.)

She says let’s build on the ACA, not start a whole new system (i.e. Bernie’s ‘Medicare for All’) that will be divisive and lead to gridlock that won’t help anybody.  “I’m a progressive who likes to get things done!  You need to be both a dreamer and a doer.”  And then one of her tag lines:  everyone in the audience knows and shouts the response with her: “If standing up for women’s rights, equal pay, reproductive rights, is playing the gender card — then DEAL ME IN!”

She ends with “I’m fighting for each and every one of you.”  And leaves to cheers, and the show’s suddenly over.

So now I know how the other half lives, or at least what they live on.

One Response to The Big Show