The Bern, and The Snow

Friday afternoon.  Still snowing heavily as I drive, carefully, up to Exeter where Bernie Sanders is to speak at the Town Hall.  Not just hold a town hall-style meeting, but address a crowd at an honest to gosh real New England Town Hall.   Doors opened at 11 and the event is set for 1 o’clock.  It’s a bit after noon when I arrive, and I feel I’m living right when I pull in at a corner across the street from the Town Hall, wonder if I’m far enough from the curb to avoid a ticket, and then see the couple who belong to the van parked immediately in front of me approach their vehicle to drive away.  I slide into their spot and I’m golden.

The line for admission stretches down from the front doors of the building, along to the corner, around it and halfway down the long sidewalk running the length of the place.  As I take my place at the end of the line, more people keep arriving and it grows.  Many but not all are young, looking like college students.   We stand cheerfully as the snow comes down.  I admire the girl who gets in line behind me.   She is attractive but I mostly admire her fur-lined hood.  I have not brought a hat.

Gradually we move up as people are admitted to the hall; they are going through security so it takes a while.  I reach the corner, then the small plaza in front of the building, then the foot of the steps — about 20 people from the entry doors.  And then they close!  Sorry, it’s full.  Can’t admit any more.  And please everybody clear the steps and portico, in case we have to get the people inside out.  The police are friendly but firm.  Cries of disappointment in the crowd near the doors.  The rest of the line, that still stretches around the corner and beyond, doesn’t grasp it yet.

If I wanted to be politically snarky – and who doesn’t these days? – I’d say this is what socialism is like: lines of people waiting hours for something, only to be eventually told we’ve run out of it, go away.  Get used to it, Bernie fans.  But I won’t say that.  In fairness, socialism Russia-style is far different from socialism, Sweden-style.  But both involve lots of snow.  Which is why I linger on the portico and approach the folding table where a couple of nice middle-aged lady Bernie volunteers are selling campaign goodies — including hats!  I buy a nice white knit hat to pull over my head once I can first dry off my hair.  The hat says Feel The Bern and has a silhouette of his hair and glasses.  I feel I’m involved.  I’m an agent of social change.  Yes we can!  oh wait, that was last time.

I later notice the little tag inside that says, Made in Vietnam.  This may be Bernie’s subtle way of reinforcing his complaint about companies sending American jobs overseas.

I’ll just have to catch Bernie tonight instead; there’s a big Democratic fundraiser I’m attending, so I will see him then.  Meanwhile, I stop into Me and Ollie’s Bakery — not owned by English teachers, one hopes — and get a cup of tomato bisque (today’s special) to go.  I have it in the car while plotting my route home, and it is excellent.  Although the free slice of bread they added – an airy wheat bread with little somethings in it – isn’t worth eating.

Google Maps shows me that just a couple blocks from where I sit is Phillips Exeter Academy.  I have some time, so I drive in circles on one-way streets til I figure out the maze and drive into campus, park and walk around a bit.  It’s 2 p.m. Friday afternoon.  Still snowing, and hardly anyone outdoors (perhaps they are all in classes).

What an absolutely gorgeous school.  It looks exactly as it should, and with all the trees heavily filigreed with snow, it’s perfect.  I take some pictures.  Going to a school like this would make anyone want to be smart.  For some reason I take great pride in this school.   I have no connection to it, probably couldn’t have got in, much less have afforded it.  (Was there much financial aid in the 60s?)  I’m just proud that this place exists, and in my very own country. 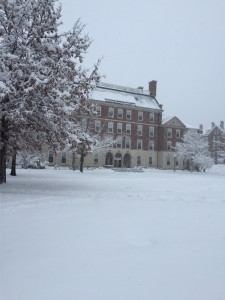 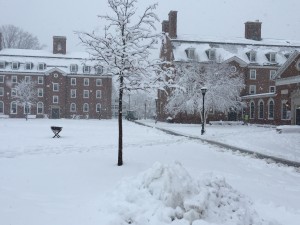 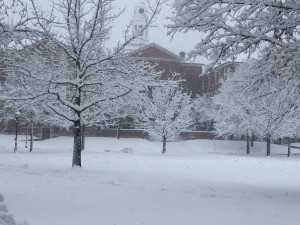 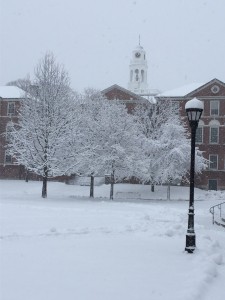 (These don’t convey the light but maybe as I learn more I can improve that; I’m pleased I have figured out how to add images at all. )  Just for fun here is the Exeter Town Hall — you can tell it is, because it says so: 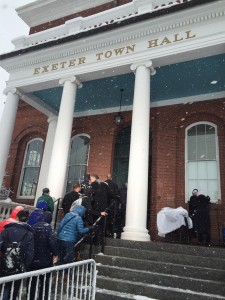 On the highway back from Exeter to Manchester, I catch up with the Christie campaign bus and pass it.  I hide the Bernie hat, in case anyone in there is looking out the window and taking down license plates.  As I reach Manchester the snow stops falling and I can see a sliver of clear sky near the horizon.  It will be a good night for a party.